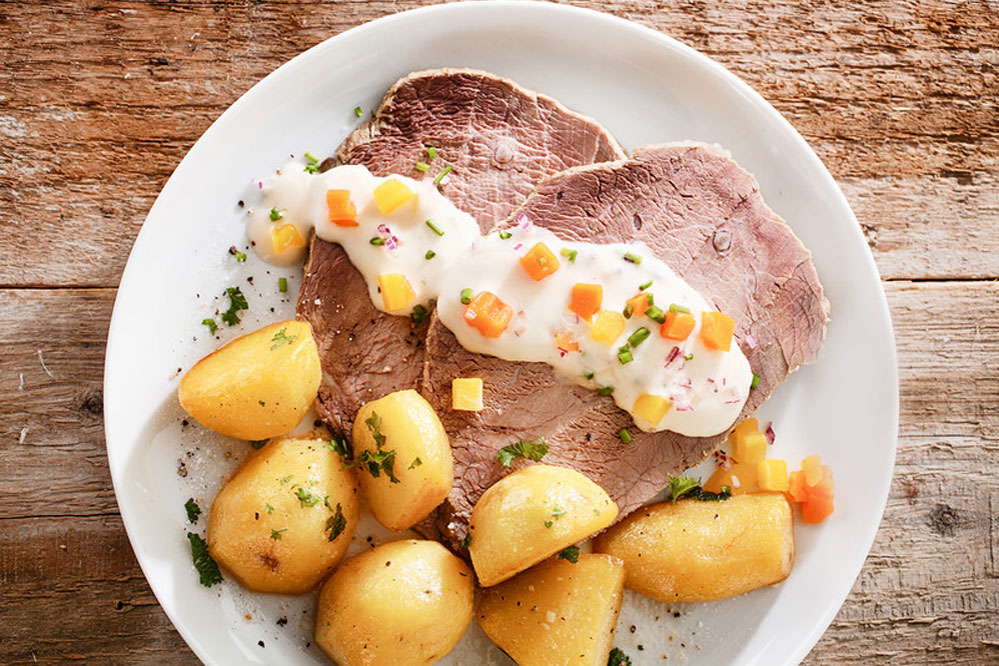 The roast should have a good layer of fat on it which can be removed after serving. Wash the tri-tip and the marrow bones and place in a large pot, bones first. Peel the carrots, turnips, and celery cut half of them into large 1-inch chunks, reserving the other half for later. Add them to the pot with the spices, but no salt.
Cut onion in half (if it is a nice onion, you do not even have to peel it) and brown the cut half in a hot, ungreased pan until almost black. Add to the pot. Cover with water, then bring to a boil. Skim any foam, then reduce to a simmer and let it simmer for 2 to 3 hours (at high altitude, this can be considerably longer) or until a fork pierces the meat easily. Remove the meat and bones to a plate and pass the broth through a sieve, reserving the liquids and throwing out the vegetables and spices. Place the meat back in the broth, add the second half of the vegetables, cut a bit smaller this time, and simmer until vegetables are tender (1/2 to 1 hour). Add salt to the broth just before serving, to keep the meat from drying out.
Cut the meat across the grain into thin slices. For the chive sauce, mix the sour cream with chives. Salt and pepper to taste.
For the horseradish sauce, grate some fresh horseradish and mix it into a cup of unsweetened, softly whipped, whipping cream.